Paint your wagon ~ or at least your folding chairs

Sooo, I've got the paint picked out for the half bath downstairs.
I just need to find my motivation to get started and pick up supplies.

Hunh.  Sometimes I put off larger projects by doing smaller, easier ones.
You, too? 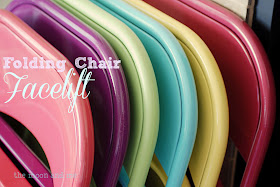 Most of us have a few of these hanging around the garage or basement.
Real beauties, I tell you what! 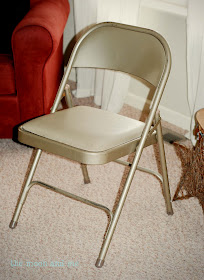 Did you know that's quite the easy fix?
Yep.
Spray paint to the rescue!

I had seen a picture on Pinterest that linked back to a Flickr feed.
So it wasn't even a DIY thing...it was a photo of a bunch of chairs at some cafe in Europe. 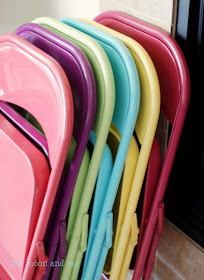 I thought to myself: Self, this is a great idea!
I had two like the one pictured above with the cushion.
I primered the cushion really well with the Rustoleum primer.
Let it dry for at least 24 hours...good to go! 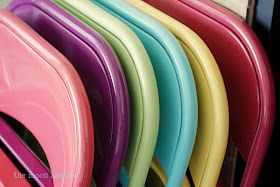 The rest, I just wiped clean and started spraying.
I learned some things about spray paint.
It is NOT all created equal. 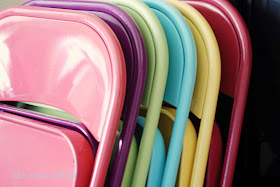 I never could find a LIGHT orange so I ended up with two pinks.
However, I tried three different kinds...wanna know my opinion?

Krylon was my favorite.

With the Valspar spray paint there was SOOOO much
over spray dust - the whole garage was coated...along with my feet!
The Rustoleum I used was okay...but still quite a bit of dust.
The Krylon covered well and had the least amount of over spray.
And there's my two cents worth. :)

Oh, and with two coats for each chair...I used one can per chair. 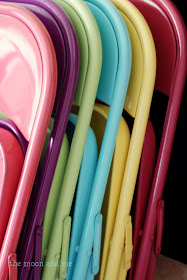 Here's a peek of them at the s'mores party
that I haven't gotten around to posting yet.
Yeah...I'm slow like that.
Whatever.
Teenagers and Twister.
What a combo! 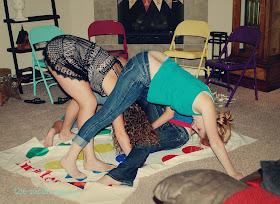 Here they are leaning against the house on the deck. 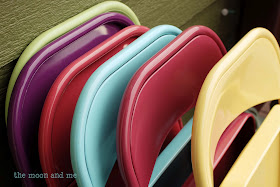 This deck...but that's a story for another day.
See? It doesn't even have any perty flowers on it.﻿ 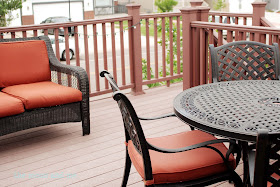 I really like the difference it made on the appearance of these chairs.
Now they're so much more fun! 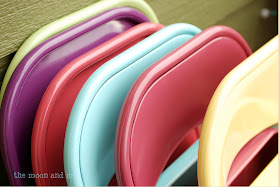 What do you think?
Do you have any metal folding chairs sitting around that need a face lift?

Update:
I've had several questions about priming and sealing.
I did NOT prime the chairs themselves.
I only primed the vinyl cushions.

They've not had a lot of heavy use yet so
they are still holding up well.  I will let you know if that changes.
I might suggest spraying them with a top sealer just to extend the paint life.
Paint gets scratched...especially on stuff like this.
But it should be an easy fix...just touch up with a few spritzes.

New comments are not allowed.